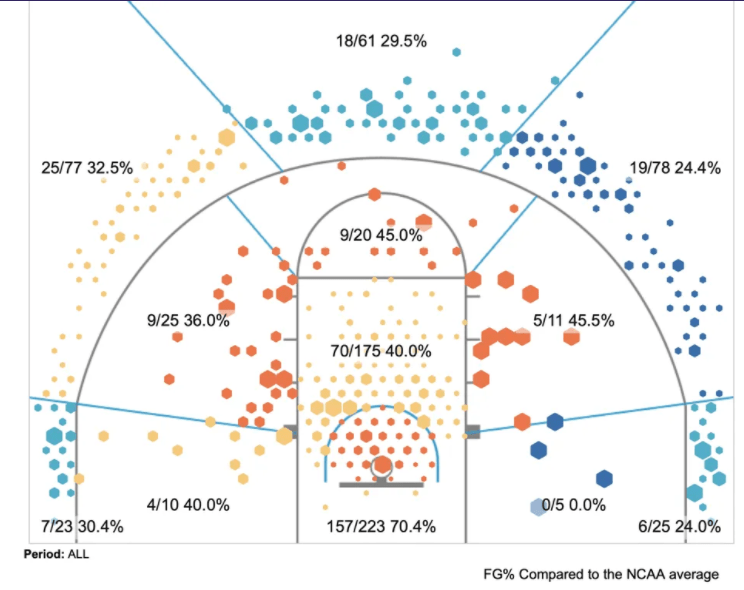 In Basketball, there are very basic data points that are deceptive because they do not tell the entire story of how a player or team are performing.  Offensive scoring and shooting analytics can help you understand the game better and make better distinctions between the various teams and players regardless of league.  Having a better understand of the analytics will help you with getting a better handle of betting games and offense is critical.

Points Scored Per Game:  This is not a helpful statistic because it is a data point in a vacuum.  What was the pace of play?  How many shots were taken?  How efficient was the player or team?  Where were the shot attempts?  What was the shot quality?  Was the shot made off an assist?  See, it is a data point that leaves more questions to be asked.  It is easy for a sports writer to just use it as a throwaway citation or to make a claim of support for the weakness or greatness of a team or player’s offensive prowess, but it is not useful data.  It does not tell much of a story, you learned nothing about the team or player other than the amount of points scored per game.

Assists Per Game:  Also, not very helpful for the same reasons.  A high possession game should mean more assists, but it also could be the case that a low assist rate could be the result of many fast breaks, Free Throws Attempted, and open driving lanes.

Starting to notice a pattern here?  Per game metrics are deceptive as they do not tell the story of the game.

Now that we are wanting deeper answers into how a team’s offense operates and how the players perform in the offense, let’s go through advanced scoring and shooting metrics bettors should look for when considering two teams in a Basketball game.

The Offensive Shooting and Scoring Metrics to Know

These metrics tell you about the offense and what the offense is looking to accomplish.  Some teams will look to shoot a high percentage of three point shots and if a team plays this way, one can infer that the team likes to play a 5 out or 4 out 1 in offensive style when combined with other factors.

In this Dunks and Threes basketball world, a team that attempts a lot of mid-range shots and does not make them would be considered inefficient.

Effective Field Goal Rate puts all players on an even playing field as far as their shooting efficiency on the floor.  You will find that post players typically have a higher Effective Field Goal Rate than Point/Combo Guards because post players attempt more shots at the rim, are set up more often by an assist for their shots, and get put-back baskets.

What True Shooting Percentage does is assess how well a team or player does when there is a shot attempt in an offensive possession.  It is the shooting efficiency of a player that takes all shots into account.

Don’t mistake this for Assists Rate, this is the percentage of shots made that were assisted per area of the half court.

How to use this particular knowledge?

Percentage of Shots in Transition

Compare a team’s transition offense Effective Field Goal rate to their half court offense Effective Field Goal rate, it will tell you whether the team has better transition offense chemistry or if the team is very set oriented.  Contrast this with an opponent’s transition defense, a team that does not allow many shots in transition has better transition defense as they are stopping shot attempts from happening.  It is important to see if the opponent does a good job stopping the half court offensive sets as well.  This is a consideration that may shape your view of the Total for the game and how the two teams will approach the battle of tempo.  Some teams will struggle in fast tempo situations and others thrive, let the data give you the guide.